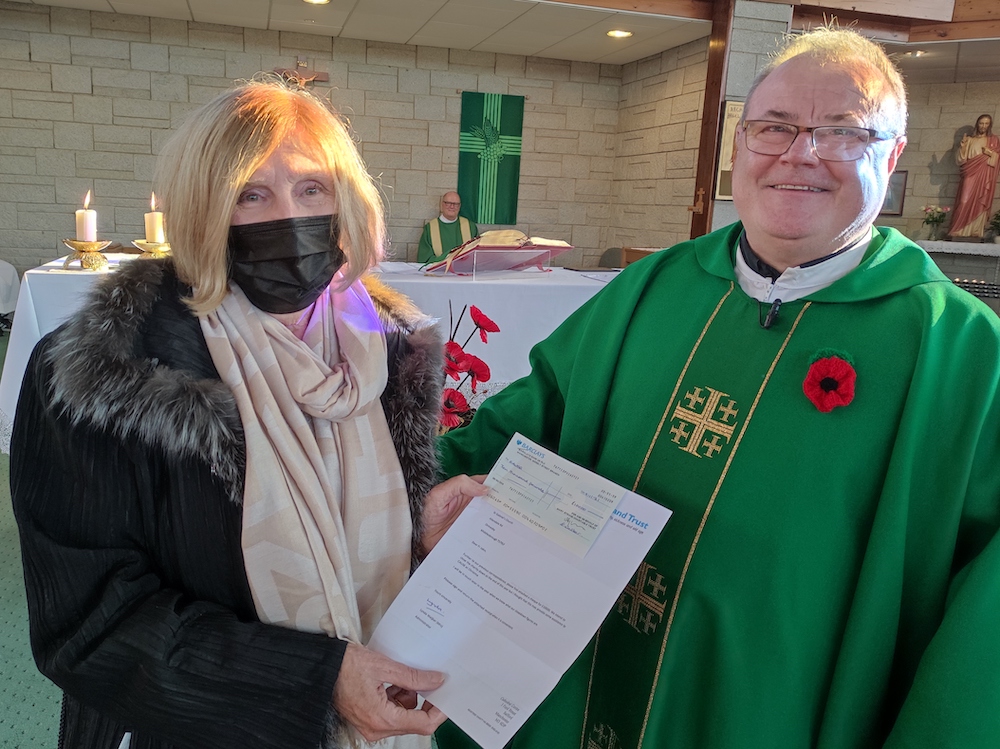 A charity that has helped struggling Teesside families for more than 30 years is celebrating its biggest-ever windfall.

The CAUSE Foundation– which began life as Catholics Against Unemployment and Social Evils – says the £10,000 donation from the Mary Strand Charitable Trust has already started making a huge difference.

Pat McBride founded CAUSE along with and Carol and David Cross in the 1980s after hearing about the problems a young unemployed mum faced over the festive period.

Since then CAUSE – which was recently granted charitable status – has grown from giving out 25 hampers in its first year to around 1,500 this year.

But retired French teacher Pat says that only tells part of the CAUSE story.

“It’s not just about hampers any more, we’ve grown so much, especially in the last ten years,” she said. “We now help families all year round. We receive crisis calls all the time, often from social workers, and I now have several requests for help every week.

“I had an emergency phone call last Friday from a school because a parent didn’t have anything to feed the children over the weekend. I always have spare hampers in the house, so we were able to give them a hamper and vouchers and that mum’s all right for the week.”

Pat says the number one request she gets is for children’s beds and bedding.

“Every child has a right to a bed and warm bedding, but we’ve heard about children who don’t have a bed and are sleeping on the floor,” she said.

“I’ve recently had calls for three cots and four lots of bunk beds. I had to think about that because they are so expensive, but as soon as I heard that we had this money, I went out and ordered them.”

Canon John Lumley, parish priest of St Gabriel’s Catholic Church in Ormesby, applied for the donation after hearing that the Mary Strand Trust was winding down and looking for good causes to donate its final funds to.

“It’s incredible, I’m completely overwhelmed and so are all our trustees,” said Pat. “It’s a tremendous amount, but trust me, it will be used wisely and will go a long way for families in our area.

“It will help us provide for families who are destitute, women who’ve left domestic abuse situations, and people in need for so many reasons.”

Many of the 1,500 hampers given out each year are donated by schools and churches of all denominations, as well as by individuals, who are given a specific, unnamed family to buy for so that they can also add appropriate gifts to the hampers.

Having charitable status has been another big boost for CAUSE, enabling them to apply to additional sources of funding.

“We have a wonderful team now,” says Pat. “We have six trustees who meet monthly to make decisions together about how we will go forward, and our treasurer, Julie Hull, organises all the hampers and admin and her brother Craig Adamson looks after our IT.

“I’d also like to express thanks to all our supporters and volunteers, without whom we would not be able to do this work.”

CAUSE also operates a holiday hunger project, which focuses on young children with little food to eat while they are not getting a free school dinner, and Pat hopes to spend some of the new money on providing a Christmas dinner for families.

Find out more about CAUSE at facebook.com/causechristmashampers or email  crisis@cause-foundation.org.uk.