‘I have called you by your name; you are mine’

In spite of the snow on the First Sunday of Lent, there were very few empty seats in St Mary’s Cathedral for the Rite of Election. Only Our Lady and St Peter’s Parish in Bridlington was unable to get there. This year, 20 catechumens, who are preparing for Baptism, and 71 candidates, who are preparing to be received into full communion with the Catholic Church this Easter, were presented to Bishop Terry. This number was a slight increase on the record number of 2009, and it was also good to see an increase in the number of parishes represented. This year, the catechumens, candidates, godparents, sponsors, catechists, fellow parishioners and parish priests represented 25 parishes across the Diocese. 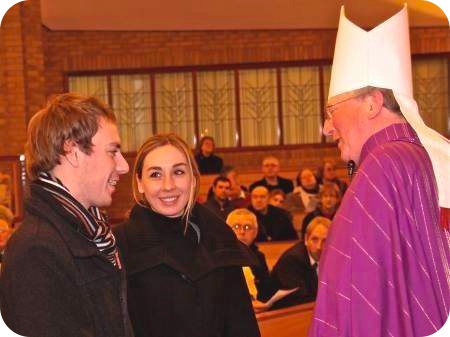 Fr Michael Keogh, Diocesan Co-ordinator of the RCIA, welcomed everyone and explained what was to happen during the afternoon. The service then began with the hymn ‘Do not be afraid’ with its chorus of ‘I have called you by your name; you are mine’. After the Liturgy of the Word, in his homily Bishop Terence reminded us all of our calling, and observed that even across a crowded room we will hear when someone speaks our name. Each call is unique and personal, and the call of the shepherd is always recognised. The catechumens and candidates had heard their personal call from God and responded with generosity.

Caroline Dollard, Joint Co-ordinator of RCIA, presented the catechumens to Bishop Terry, and as their names were read out by her, they went forward with their godparents to stand before him around the sanctuary. After the godparents had been questioned, the catechumens went to the altar and publicly signed the Book of the Elect. The Bishop then added his signature, and declared the catechumens now to be the Elect.

The candidates were then presented to the Bishop and after their sponsors had spoken on their behalf, he accepted them for reception into full communion with the Catholic Church this Easter. The Bishop then spoke briefly to each of the Elect and the candidates and presented them with a wooden cross, a symbol of new life. The godparents and sponsors each received a prayer card reminding them of their very special call to prayer, support and encouragement for those in their care. The service continued with the Intercessions and Blessing, ending with the hymn ‘I the Lord of sea and sky’. The celebration was enriched by the singing of the Diocesan Choir led by Fr Stephen Maughan and also by the hospitality provided afterwards by the Cathedral parishioners.

Two weeks earlier, on 6th February, Fr Michael Marsden had led the annual Retreat Day for catechumens and candidates at All Saints Lower School in York, which was also very well attended. The theme of the inspiring day was ‘Prayer’, and Fr Michael also brought his guitar along and taught everyone a new hymn, which was sung in the afternoon as catechumens and candidates signed a special scroll to confirm their desire to go forward to the Rite of Election.