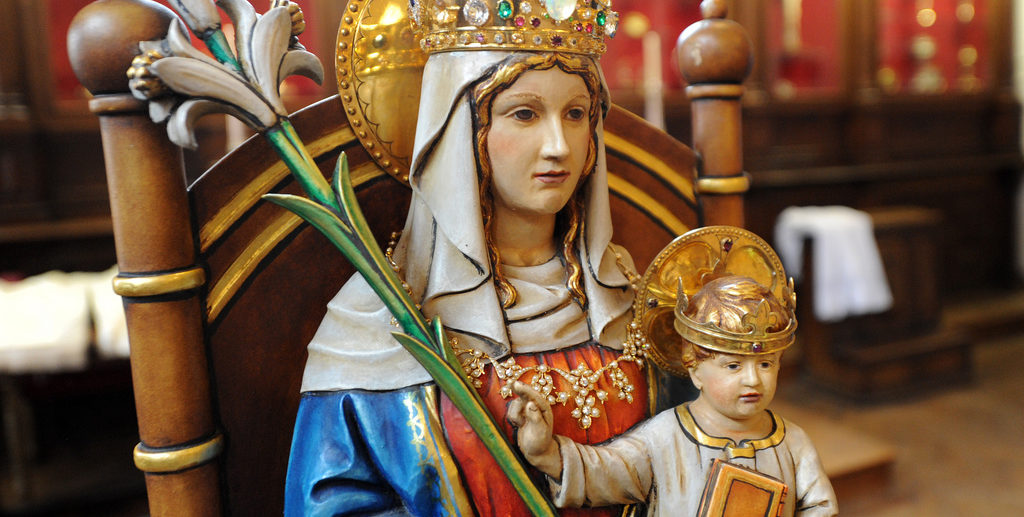 The timetable has been unveiled for events during the Dowry Tour of Our Lady of Walsingham to St Mary’s Cathedral in Middlesbrough.

The statue, which usually resides in the shrine’s famous Slipper Chapel, is being taken around the country for two years as part of the spiritual preparation for England’s rededication as the Dowry of Mary in 2020.

Although the exact origin of this title is unknown, in medieval times it was widely used to indicate that England belonged in a special way to Mary as the country’s protector.

Speaking of the rededication, which will take place around the Solemnity of the Annunciation in March 2020, Cardinal Vincent Nichols said: “This is a moment of great promise for the Church in this country and for our mission.”

The cathedral will be open to welcome people to venerate, pray, and place flowers before the statue of Our Lady of Walsingham. There will be talks on the Dowry of Mary by the rector of the shrine at Walsingham, Monsignor John Armitage. Pilgrims will also be able to view an exhibition about the title of England as Mary’s Dowry and the history of the shrine.

The statue was given a place of honour during Pope Saint John Paul II’s visit to England in 1982 and again during this year’s Adoremus Eucharistic Congress in Liverpool.

The village of Walsingham, in Norfolk, has been a major centre of pilgrimage for almost 1,000 years and now has both Catholic and Anglican shrines, as well as an Orthodox chapel.

5pm: Shrine and exhibition open. Rosary for a spiritual renewal to facilitate the New Evangelisation

8.15pm: Talk on the Dowry of Mary by Monsignor Armitage

Friday December 14, Feast of St John of the Cross

8.45am: Shrine and Dowry Exhibition open for pilgrims – Confessions available throughout the day.

11am: Rosary for the conversion of our families, friends and enemies

4pm: Rosary for the conversion of England

6.30pm: Rosary for vocations to priesthood and religious life

8.30pm: Talk on Dowry of Mary by Monsignor Armitage

8am: Mass of Our Lady celebrated by Monsignor Armitage

8.30am: Shrine and exhibition open

10am: Rosary for the renewal of marriage and family life