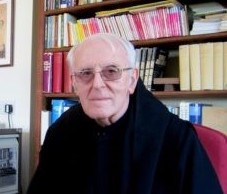 Father Alban Crossley OSB, Benedictine monk of Ampleforth Abbey, died on February 2 at the age of 86.

He was born in Farnworth, Lancashire, and joined the monastic community at Ampleforth Abbey in September 1955.

From 1958 to 1961 he was at St Benet’s Hall at the University of Oxford where he took a degree in Physics, and from 1961 to 1965 he studied Theology at Fribourg University in Switzerland. Father Alban was ordained priest on July 18 1965.

From 1968 to 1979 he worked in the Junior House of Ampleforth College, where for many years he was assistant housemaster.

When he retired from that role in 1979 Father Alban enjoyed a sabbatical year studying liturgy in the United States, Rome and a number of European countries.

In 1999 Father Alban was appointed to the Monastery of Christ the Word, Zimbabwe, a foundation established by the monks of Ampleforth Abbey in 1996.

He remained in Zimbabwe until 2010. On his return to England he worked in St Austin’s parish, Grassendale, before his appointment as monastery guestmaster at Ampleforth Abbey in 2012.

In recent years Father Alban’s health declined and he became less mobile. He died peacefully in York Hospital on February 2, the Feast of the Presentation of the Lord and a day of prayer in the Catholic Church devoted to all men and women in the consecrated life.

Funeral arrangements are made in accordance with the necessary protocols due to the coronavirus pandemic. The reception of the body into the Abbey church at Ampleforth will be on Sunday February 14 at 8.15pm. The private funeral Mass will be at 11.30am on Monday February 15, followed by burial in Monks’ Wood.

The links for audio-streaming and video-streaming are available at the Ampleforth Abbey service times webpage.