Faith Renewed With Pope Francis In The Sun 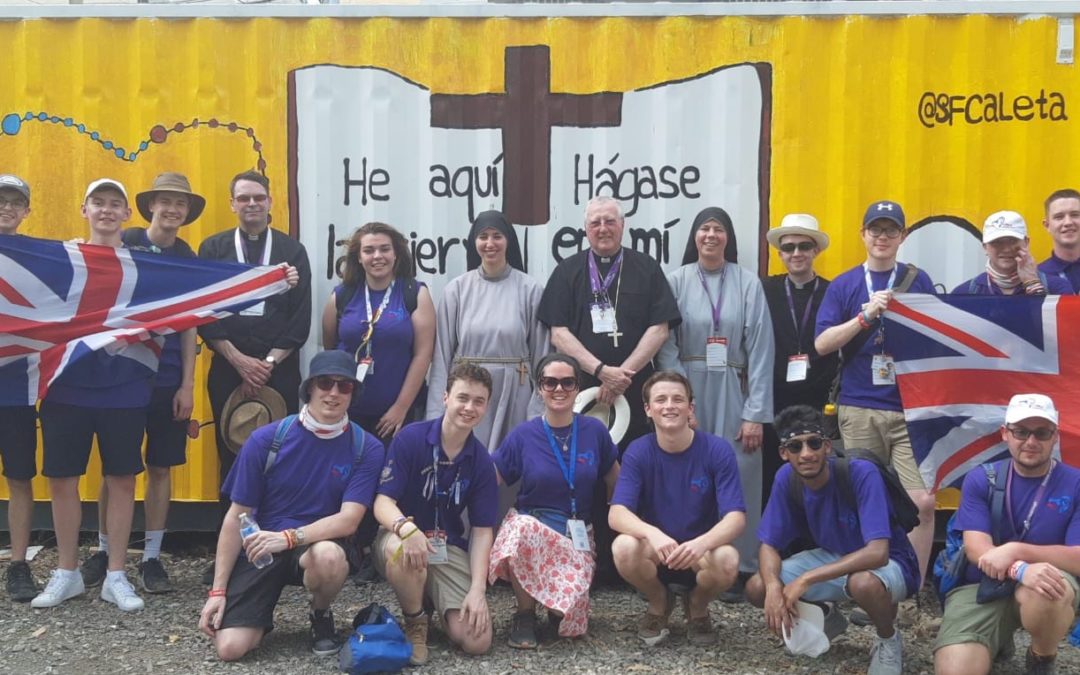 A group of 20 young people from our diocese plus Bishop Terry, Father William Massie, Father Phil Cunnah, Deacon Peter Taylor and two Franciscan sisters, flew out from Newcastle to Panama City – via Heathrow and Bogota – to join Pope Francis for World Youth Day. One of our young people, MICHAEL KENDALL, tells us more about their unforgettable pilgrimage….

World Youth Day in Panama was an amazing experience. In one week I felt every emotion and made memories that will last a lifetime.

This was my second World Youth Day – I also travelled to Krakow, Poland, in 2016 – but I still couldn’t have anticipated how good it would be.

The highlight of the trip has to be the overnight vigil. On Saturday morning we left our hotel to start our journey to the site. We took the metro but walked most of the way. It was tiring in the 30-degree heat – even with my newly purchased Panama hat – but it was definitely worth it.

After the sun went down, Pope Francis arrived to lead us in adoration and then we had Benediction. The experience was surreal, sharing a field with almost a million other young people from around the world, kneeling and all praying together in silence in front of the Blessed Sacrament. The silence of so many people took my breath away.

In the morning, after sleeping under the stars, Pope Francis led us in Mass, which was exceptional. In the homily he inspired us by telling us we are the “Now of God”. He encouraged us to continue living the faith and sharing it with others around us.

Another highlight for me was the catechesis sessions, attended by around 1,000 other English-speaking pilgrims. This gave us a chance to meet others from around the world and talk about our faith. It also offered an opportunity to learn more about our faith through the talks.

Each was led by inspirational individuals, including Bishop Edward Burns from the Diocese of Dallas and Bishop Alan Williams of Brentwood Diocese. The sessions were followed by a Mass together with the other English-speaking pilgrims. We also attended a reconciliation service, which gave us an opportunity to go to confession.

I mustn’t forget to mention how friendly and welcoming the locals were to us. As we walked around as a group with our Union Jack flag, many of the passing cars honked their horns and waved to us. Even when crossing the roads, cars would stop for us and local cafés left free water out for us to drink in the boiling heat.

To sum up, World Youth Day has definitely strengthened my faith, by seeing so many other young Catholics from around the world who share the same beliefs as I do. I was inspired by the words from Pope Francis and learnt more about my faith through the catechesis sessions.

Finally, I had the privilege of meeting others from around the world and formed many new friendships with others from our diocese.

I would definitely recommend World Youth Day to anyone who has the chance to go – it’s an experience you will never forget. I’ve already started a countdown for WYD Portugal in 2022!

*Father Phil adds: “We were blessed to have Barney Ord with us and I would like to thank him for helping us organise this pilgrimage and for all the generous support offered to our youth service.”