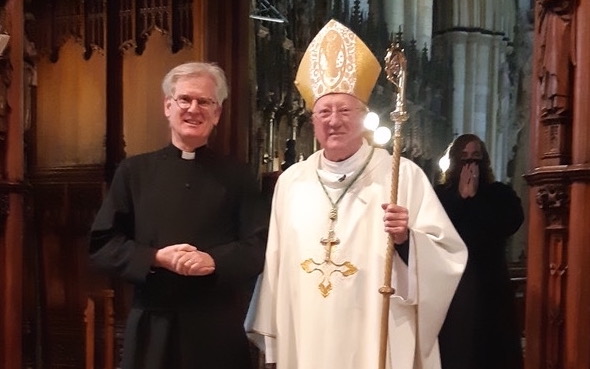 A historic event took place in Beverley on Sunday October 2 when a Catholic Mass was celebrated in the Minster for the first time since the Reformation.

The service was to mark the 1,300th anniversary of the death of St John of Beverley. Bishop Terry was the principal celebrant and was joined by fellow diocesan priests. The church was full and the Vicar of Beverley Minster, the Reverend Canon Jonathan Baker, extended a warm welcome to everyone.

Members of the diocesan choir were in attendance and their singing enhanced the liturgy. It was moving being part of a large congregation at such an auspicious occasion.

St John of Beverley was born at Harpham, a few miles from Driffield, on the Wolds. He studied at Canterbury under St Adrian. When John returned to the north, he entered the double monastery at Whitby under the remarkable abbess, St Hilda.

In 687, John was consecrated Bishop of Hexham in succession to Bishop Eata, one of the 12 disciples of St Aidan and the teacher of St Cuthbert.

During his time at Hexham, John ordained the future St Bede as a priest. He was a good pastoral bishop, a man who loved the Scriptures and a patient teacher.

He also had a deep-seated need for prayerful solitude and would retire to a quiet place on the banks of the Tyne for prayer and to study the scriptures, especially during Lent.

In 705, he was appointed to the See of York in succession to St Bosa, himself a former monk of the monastery at Whitby.

John remained in the diocese for 12 years, but the call of solitude remained strong and four years before his death he retired to Beverley to a religious house he founded there.

He died in 721, having worked for more than 30 years as a bishop. His shrine became famous throughout the country and was one of the chief places of devotion for many years.