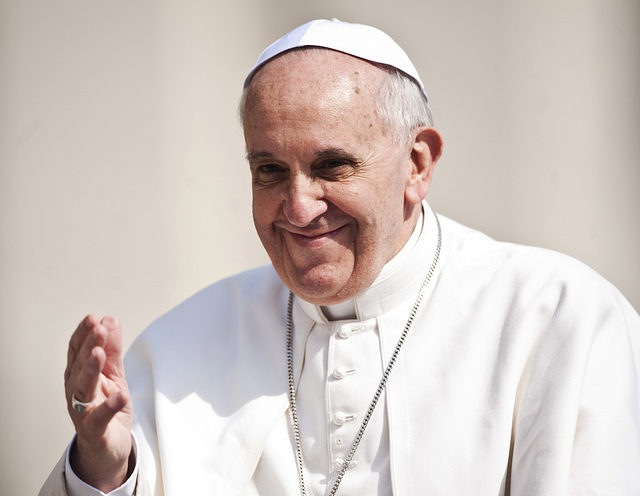 Message of Pope Francis for the First World Day of the Poor, Sunday November 19 2017

Pope Francis has called on Christians around the world to serve the poor, writing in a document launching a new World Day of the Poor. The title of the message is taken from John’s first letter, in which the apostle tells the Christian community: “Let us not love in word or speech, but in deed and in truth.”

The World Day of the Poor is a new celebration on the Catholic calendar, created by Francis at the end of his 2015-16 Jubilee Year of Mercy. In the document concluding the year, Misericordia et Misera, the pope asked Catholics to celebrate the special day every year on the 33rd Sunday of Ordinary Time, which usually falls in November.

The pope hopes the new World Day of the Poor can “become a powerful appeal to our consciences as believers, allowing us to grow in the conviction that sharing with the poor enables us to understand the deepest truth of the Gospel.”

There are the two themes in his document: the necessity to reach out to those experiencing poverty both in our communities and worldwide but also the need to develop a spirit of authentic poverty which enables us to develop a right attitude towards material goods and above all “to create moments of encounter and friendship, solidarity and concrete assistance”.

In the message, the pope makes poetic and powerful scriptural argument why Christians must reach out and care for those experiencing poverty. He quotes Psalm 34: “This poor man cried, and the Lord heard him” and refers to the very first pages of the Acts of the Apostles, where Peter asks that seven men, “full of the Spirit and of wisdom” (6.3) be chosen for the ministry of caring for the poor.

The earliest community realised that being a disciple of Jesus meant demonstrating fraternity and solidarity – that the poor are blessed and heirs to the Kingdom of heaven (Mt 5.3). The pope also reminds Catholics that they believe Christ is found in every human person.

“If we truly wish to encounter Christ, we have to touch his body in the suffering bodies of the poor, as a response to the sacramental communion bestowed in the Eucharist,” he says. “The Body of Christ, broken in the sacred liturgy, can be seen, through charity and sharing, in the faces and persons of the most vulnerable of our brothers and sisters.”

Pope Francis encourages us to take as our example Saint Francis of Assisi and his witness of authentic poverty. Because he kept his gaze fixed on Christ, St. Francis was able to see and serve him in the poor.

The pope describes authentic poverty as an interior attitude that avoids looking upon money, career and luxury as our goal in life and the condition for our happiness. Poverty instead creates the conditions for freely shouldering our personal and social responsibilities, with trust in God’s closeness and the support of his grace. This helps us to judge how best to use material goods and to build relationships that are neither selfish nor possessive.

Francis puts forward three new ways Christians can be seen as blessed, in the style of Jesus’ beatitudes. “Blessed…are the open hands that embrace the poor and help them: they are hands that bring hope,” he says. “Blessed are the hands that reach beyond every barrier of culture, religion and nationality, and pour the balm of consolation over the wounds of humanity…Blessed are the open hands that ask nothing in exchange, with no ifs or buts or maybes: they are hands that call down God’s blessing upon their brothers and sisters.”

Francis asks Christian communities to begin celebrating the World Day of the Poor in the week before the special day by reaching out to homeless or poor people in their areas in friendship and offering hospitality. “If there are poor people where we live who seek protection and assistance, let us draw close to them: it will be a favourable moment to encounter the God we seek,” he says.

On the World Day of the Poor itself, the pope asks that Catholics and all those of good will “turn their gaze…to all those who stretch out their hands and plead for our help and solidarity. This day is meant, above all, to encourage believers to react against a culture of discard and waste, and to embrace the culture of encounter.”

Francis ends by placing prayer at the centre of the celebration of the day with specific focus on the Our Father. “Let us not forget that the Our Father is the prayer of the poor,” he says. “When the disciples asked Jesus to teach them to pray, he answered in the words with which the poor speak to our one Father, in whom all acknowledge themselves as brothers and sisters.”

He concludes by saying: “The poor are not a problem. They are a resource from which to draw as we strive to accept and practice in our lives the essence of the Gospel.”

“become a powerful appeal to our consciences as believers, allowing us to grow in the conviction that sharing with the poor enables us to understand the deepest truth of the Gospel.”

Caritas Middlesbrough, which coordinates groups in our diocese that promote social justice and care, has begun looking at ways to promote and celebrate the World Day of the Poor in our diocese.