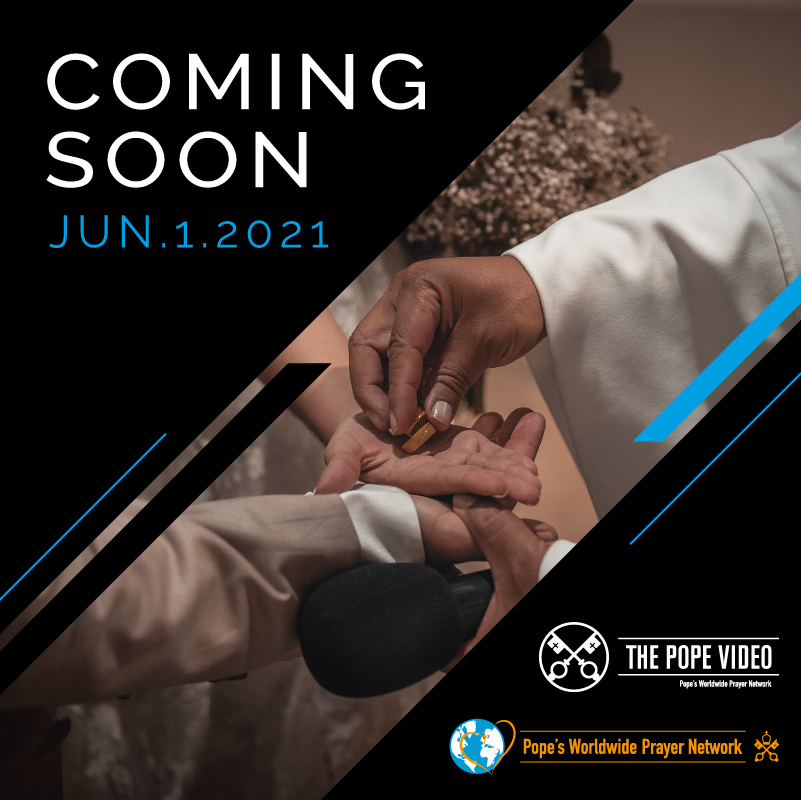 28
May, 2021
Pope Francis | Pope's Prayer Intention
Look For The Beauty Of Marriage

The upcoming Pope Video, which will be published on June 1, presents the prayer intention that Pope Francis is entrusting to the entire Catholic Church through the Pope’s Worldwide Prayer Network.

“Let us pray for young people who are preparing for marriage with the support of a Christian community: may they grow in love, with generosity, faithfulness and patience.” The video will be published in collaboration with the Dicastery for the Laity, Family and Life.

The Holy Father’s intention delves into the demanding journey of marriage, one which is worth having the courage to undertake despite the difficulties, since “the husband and wife aren’t alone; Jesus accompanies them.”

Aware that it cannot be merely a social act, Francis invites young people to prepare themselves to make their own the dream that God has prepared for them – love.

This prayer intention for the beauty of marriage is in the context of the special year dedicated to the family, which just began on March 19, 2021, with the following motto: “Family love: a vocation and a path to holiness.”

This convocation coincides with the fifth anniversary of the encyclical Amoris Laetitia and with the third of the apostolic exhortation Gaudete et Exsultate.

The Pope Video is possible thanks to the generous contributions of many people. You can donate by following this link.

Where can you watch the video?

About The Pope Video

The Pope Video is an official global initiative designed to disseminate the Holy Father’s monthly prayer intentions. The venture was created by the Pope’s Worldwide Prayer Network (Apostleship of Prayer). Since the year 2016, The Pope Video has had more than 155m views across the social networks of the Vatican, and is translated into more than 23 languages, with press coverage in 114 countries.

The videos are produced and created with the support of La Machi Agency and the team of the Pope Video of the Prayer Network, coordinated by Andrea Sarubbi. The project is supported by Vatican Media. More information at: The Pope Video.

About the Pope’s Worldwide Prayer Network

The Pope’s Worldwide Prayer Network is a Vatican foundation, with the mission of mobilizing Catholics through prayer and action in response to the challenges facing humanity and the mission of the Church.

These challenges are presented in the form of prayer intentions entrusted by the Holy Father to the entire Church. The foundation’s mission is inscribed in the dynamic of the Heart of Jesus, a mission of compassion for the world.

Originally founded in 1844 as the Apostleship of Prayer, the PWPN is present in 89 countries and incorporates more than 22m Catholics. The network includes a youth branch, the Eucharistic Youth Movement.

In December 2020, the Pope constituted this pontifical work as a Vatican foundation and approved the new statutes.  Father Frédéric Fornos, SJ, is the international director of the PWPN. For more information, visit: popesprayer.va