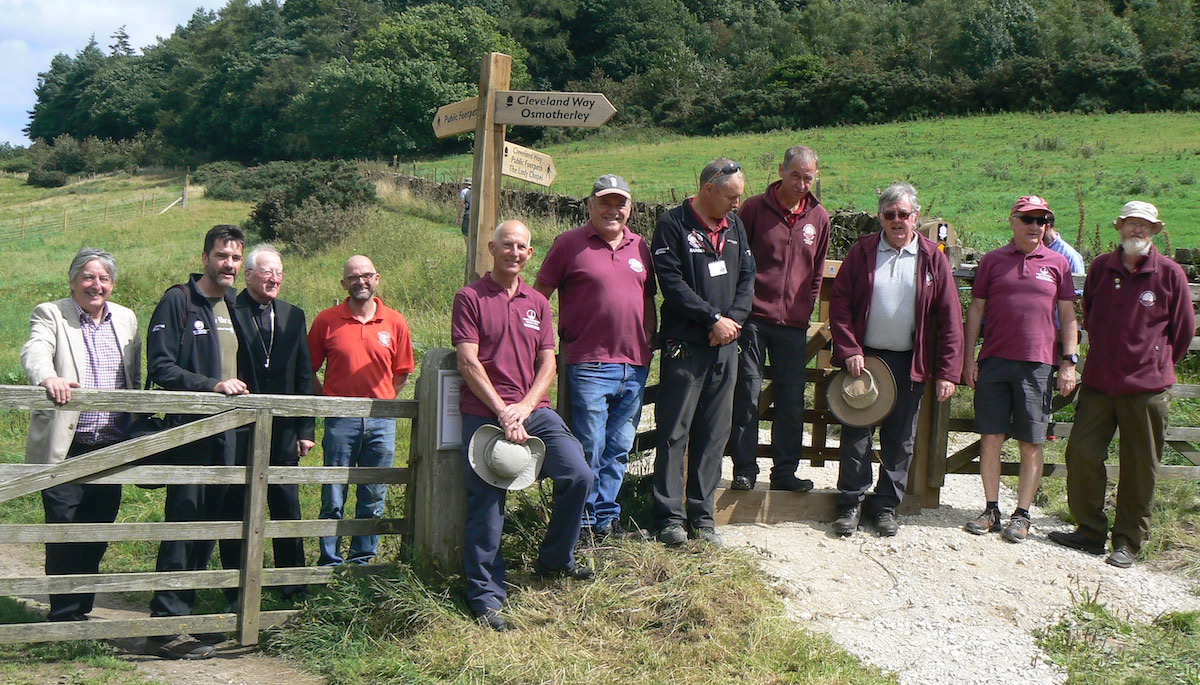 A new section of the Cleveland Way has been declared open to walkers, marking a change in the route of the 109-mile national trail.

The new pathway, which passes an entrance to the Shrine of Our Lady of Mount Grace, was opened by Bishop Terry after the unveiling of a new wooden signpost.

The Lady Chapel shrine stands on the edge of the North York Moors National Park, overlooking the village of Osmotherley. For more than 600 years it has been a place of Catholic worship and pilgrimage, but its secluded, hilltop location has kept the site hidden from many.

Now, thanks to an inspiring community effort, the Cleveland Way has been re-routed to pass an entrance to the Lady Chapel, meaning many more people will be able to appreciate its beauty and significance as they make their way along the national trail.

Access to the chapel now also lies within 500 metres of the official coast-to-coast route, hopefully encouraging others to pay a visit to the holy site.

Importantly, the original Cleveland Way path is also to remain open as a right of way, creating the opportunity for people to enjoy a new circular route from Osmotherley.

Bishop Terry said: “Christians have visited the chapel of Our Lady, the Mother of Divine Grace, for hundreds of years. It is a holy place, sanctified by the prayers of many ordinary people. But as a result of this good and gracious work, it is now definitely on the map of the modern world.

“So many more people will be able to view its simple beauty, avail themselves, of its contemplative atmosphere and move forward not only on their particular scenic walk but also on the path of their life, aided by the spirit of the Lady Chapel.

“As the Bishop of the Diocese of Middlesbrough, I can say on behalf of us all, that we are very grateful for this initiative. It is as the result of a lot of hard work and skilful planning that this project has been brought to fruition.”

Malcolm Hodgson, trail manager for the Cleveland Way said: “I am extremely grateful to all of those who have helped in the accomplishment of what has been such an enjoyable and community-minded project. In particular I’d like to say thank you to the landowner, the Diocese of Middlesbrough, and our fantastic volunteers for all their hard work in establishing the new right of way.

“It has long been the desire of those involved with the Lady Chapel to increase knowledge of its presence, both locally and further afield. Altering the route of the Cleveland Way as we have not only gives people the opportunity to enjoy this special and historic place, but also adds new panoramic views to this stretch of the national trail.”

The Lady Chapel was built in the 15th century, most probably as a place for private worship for the Carthusian monks from nearby Mount Grace Priory. The chapel later fell into ruins but continued to be a site of Catholic pilgrimage throughout the 17th and 18thcenturies.

Restoration work began in 1959 using closely matching stone from Rosedale Abbey and building on existing foundations. The original stones, some incised with inscriptions, initials and prayers of pilgrims, are still easily discernible.

The shrine Grace is open for private prayer and reflection all year round and holds regular services, including a vigil Mass each Sunday at 3pm.

Bishop Terry launched the Friends of the Lady Chapel in 2016 to raise money for maintenance and development and increase interest in the shrine within the local community and further afield. To join, or for further information about the shrine, please visit ladychapel.org.uk/friends.