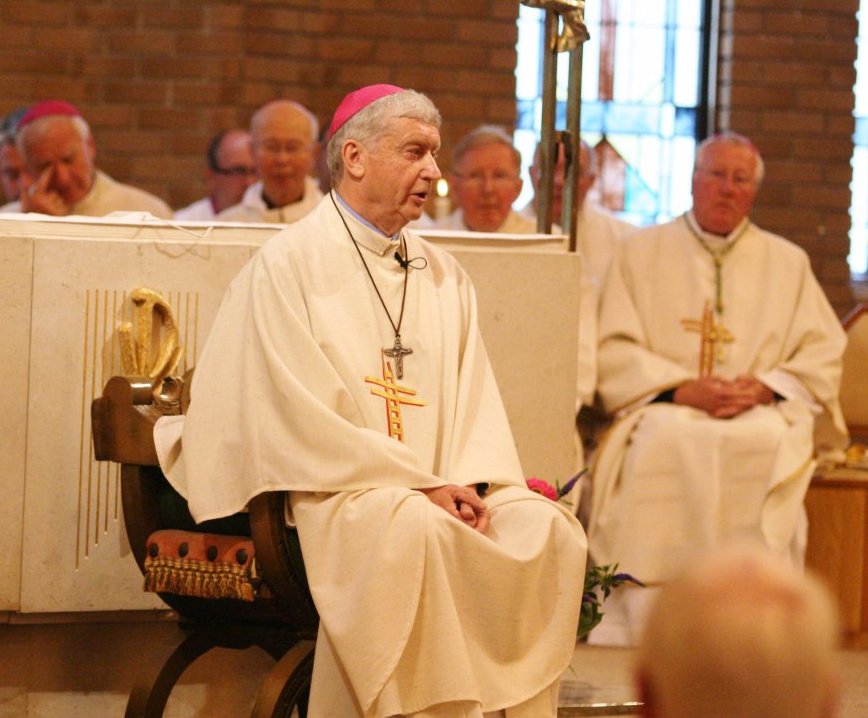 In a special reflection, Emeritus Bishop of Middlesbrough John Crowley looks back on significant encounters during his priesthood and how they gave him encouragement when he needed it most…

Every day as long as this day lasts keep on encouraging each other so that none of you is hardened by the lure of sin. Because we shall only remain co-heirs with Christ if we keep a grasp on our first confidence right to the end (Hebrews 3:13).

Having reached the 80-year mark, I find myself looking back on important conversations which strengthened and encouraged me over the years since being ordained priest in 1965. They happened at timely moments that helped shape my approach to pastoral ministry as a priest and later as a bishop.

This first took place within weeks of my first appointment to Holy Trinity Church, Brook Green. A parishioner called to see me because she wanted to suggest how I might think about preparing the Sunday homily. She was a marriage counsellor juggling a full-time job with her family responsibilities as a wife and mother of three children.
“At the moment I feel that I am doing neither well, and that depresses me,” she said. “As a result, I’m eating and drinking too much, so my morale is increasingly fragile.
“All of which means that when at Mass on Sunday, the last thing I need to hear is a moralising sermon peppered with oughts and shoulds.
“By all means, challenge me with the Gospel message, but what I need most is fresh hope and encouragement. That will enable me to win the battle against the depression which can at times overwhelm me”.

Fifty-six years on, her words remain etched in my memory whenever settling to the task of preparing a homily. It fills me with the desire to break the Scriptures open in such a way as to soften life’s many burdens with the light and joy of the Gospel.

Fast forward 21 years, and I have just been appointed auxiliary bishop to Cardinal Hume, with responsibility for Central London parishes. Tom McMahon, Bishop of Brentwood, shares with me some advice he had been given when first ordained a bishop.
“When I go to a parish, and especially during a formal visitation over a weekend, I try to keep four things in mind, all interconnected,” he said.
“Firstly, I strive to be fully present to the person or person I’m with, giving them my attention. However, secondly, I turn a blind eye to most things I hear or see which may not be to my personal taste, knowing that a constantly critical approach is bound to demoralise.

“But thirdly, situations might arise when, for the greater good of the parish, I must be prepared to challenge the status quo. Such confrontation is never easy, requiring a delicate mix of truthfulness and kindness.
“Lastly, and most important of all, I set myself to encourage a lot. My overriding desire is for all those I encounter during the weekend visitation to feel affirmed by my stay in their parish.”What timely advice that was for a neophyte bishop, and six years later it certainly helped to focus my mind again for the task ahead, of sharing the joys and hopes, the fears and anxieties, of those in the North-East of England whose pastoral care had just been committed to my charge.

It is now 1996, four years since being appointed Bishop of Middlesbrough Diocese, and this morning I am visiting Father Ian Petit, a much-loved monk of Ampleforth, for my regular session of spiritual direction.
Today, my tale is largely one of woe. Nothing much has gone well since we last met, and I am feeling overburdened. Ian listens carefully as always, empathising with the pressures of episcopal ministry, but then he throws in a piece of advice to which I return very often. “When the setbacks that life throws up seem especially dispiriting, how important it is to inhabit the promises.”

It was that invitation to inhabit the promises that remains with me to this day. I still hear his voice naming some of them from the Gospel.

Come to me all you who labour and are overburdened and I will give you rest—Matthew 11:28

I am the Vine, you are the branches. Whoever remains in me, with me in them will bear fruit in plenty—John15:5

Father Ian had reminded me of a vital truth, that such promises given us by Truth Himself remain only for words on a printed page until they are breathed in, inhabited, at heart level.

The scene now switches to El Salvador in the last decade of the 20th century, the years in which I was the chairperson of CAFOD, undertaking regular field visits to Africa, Asia and Latin America, especially to those countries where CAFOD was working in partnership.
I am sitting over coffee in the University of Central America with Father Jon Sobrino, who has been for many years part of the Jesuit Community here.
In November 1989, while he was lecturing overseas, six of his companions had been murdered along with their housekeeper and her daughter. It was a targeted assassination by a unit of the military government, a force notorious for its human rights abuses.
The Jesuits’ “crime”; they had constantly denounced the injustice and repression that had fed the civil war in a ravaged country. Thus, the decade that began with the assassination of Archbishop Romero in March 1980, ended in this savage bloodletting. At the time of my meeting with Father Sobrino, the civil war was over, but violence and human rights abuses were still rife. Father Sobrino was conscious of the dangers to which he himself was exposed by his forthright condemnation of the “structures of sin” endemic within an oppressive military state.
And, like Archbishop Oscar Romero himself, he also invited the hostility of those in a largely conservative Catholic hierarchy who regard his writing and lecturing as too politized. But at our meeting he was keen to speak less of those “structures of sin” and more about what he called “the structures of grace” which, he insisted, were everywhere to be found within the Salvadorian Church, among its catechists, lay leaders, priests and religious, often at risk of life itself.
“Unless we keep that perspective, we will rapidly become demoralised by that other story of sin within Church and state,” he said.
“Look at what St Paul told a similarly persecuted Christian community in Rome – However great the number of sins committed, so grace will reign to bring eternal life, thanks to the righteousness that comes through Jesus Christ our Lord’.”(Romans 5:20-21).
Listening that morning to Father Sobrino brought flooding back a theme to which Cardinal Hume had often returned, namely the two different faces of the Church.
The one, by the very fact of its institutional nature, will always be “bleared and smeared”by various levels of corruption, the so-called structures of sin.
Whereas the other face of the Church within the People of God will present to the world a quite different vision of goodness and holiness, especially among those whose lives are lived out far beneath the radar of any public recognition.
“Forget that face of the church,” Cardinal Hume insisted, “and you will quickly be prey to discouragement when the sins of the Church dominate the public agenda.”

The last of those conversations firmly lodged in my memory takes place in June 1999. It is a beautiful midsummer day, and I am sitting at the bedside of Cardinal Hume in SS John & Elizabeth’s hospital within a few weeks of his death.
There was much that he wanted to share that morning, but it was his new appreciation of the Lord’s own prayer, “the Our Father”,that dominated his attention.
“I have come to realise at life’s end that all the help and strength we need for our journey to God is contained within the words of the Our Father,” he said. “To be able to call God our own Father is such an amazing gift.
“Our Father who art in heaven…” he began. “Heaven is wherever God is. To become aware of God’s presence within and around us is even now to be taken up into heaven.
“Hallowed by Thy name…. That’s our one great purpose here on earth, to praise and honour God’s name by the self-giving way we live.
“Thy kingdom come, on earth as it is in heaven…God’s kingdom is one of justice, love and peace, and so all our daily striving must be to hasten its coming among us.”

Looking back now to that deathbed reflection of a great spiritual leader, I realise ever more clearly what a precious legacy he left us. For here was someone who throughout his 23 years as Archbishop of Westminster had spoken from the inside out, and with immense inner authority; a sure-footed guide who reached beyond his own Church to a nationwide constituency who hungered for such wisdom.

Five conversations spread over a lifetime of pastoral ministry, each one of them deeply formative at different stages of the journey. It is St Paul again who speaks of the power each one of us has to help and strengthen those we meet on the way.

“The authority which the Lord has given me is building up not destroying” (2 Corinthians 13).

But since my theme is centred around the power of encouragement, I want to add a postscript about the ministry of Pope Francis. I have never had a personal conversation with him, but in these last years, no other person had done as much to inspire and encourage me in the proclamation of the Gospel.
He has vociferous critics within the Church, some of them palpably hostile to his papacy. He would be the last to seek the high ground for himself personally. “I am a sinner upon whom God has looked with mercy.”
But in an era when the public credibility of the Church has been shot to pieces by the grievous wound of child abuse, his resolute spiritual leadership has given so many of us fresh joy and hope.
His dream for the Church – “a poor church for the poor” – nudges us in the same direction. His witness of rootedness and Gospel joy in carrying such responsibilities, though now in his mid-80s and with indifferent health, is a wonderful inspiration to be cherished.

“The joy of the Gospel fills the hearts and lives of all who encounter Jesus. Those who accept his offer of salvation are set free from sin, sorrow, inner emptiness, and loneliness. With Christ joy is constantly born anew.”—Evangelii Gaudium 2013, first year of Pope Francis’ Pontificate

And it’s not just the Church that needs him. His voice is increasingly heard across a world that cries out for such moral authority. In Rome today, the words of Jesus defining his own mission have been given a resounding echo, “I have come that you may have life, life is to the full.”—John 10:10