Bringing to light the true causes of the war in Congo

with Reverend Theodore Ngoy, Congolese Pastor, Lawyer, elected Member of Parliament for Katanga province in the Democratic Republic of the Congo, and former candidate for the Presidential Elections in Congo. 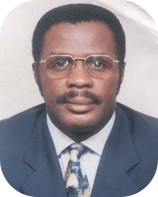 Reverend Theodore Ngoy is a Congolese Pastor, a Lawyer, an elected MP for Katanga province in the Congo, and former candidate in the Congolese Presidential elections. He was prevented from taking part in the elections due to his abduction and illegal detention. He is also a Master in Criminal Law and Criminology and a PHD student in the same field at the University of Kinshasa, in the DRC. His thesis is on the law of evidence in criminal trial in the DRC.

As a government delegate to the Congolese talks, which took place in Sun City in South Africa, to bring an end to the war in Congo and re-establish the state’s authority throughout the country, he was responsible for the nationality and minority files. In 2002 he published a book on how to restore peace in Congo, entitled: The Lusaka agreement and peace in the DRC: another viewpoint. (L’Accord de Lusaka et la paix en RDC: une autre lecture).

On the 23rd March 2007 he was visiting the UK in his role as MP when, during armed confrontations in Kinshasa, the guards of President Kabila and General John Numbi deliberately burned his residence, his lawyer’s office and the Church of Gombe, where he is the Pastor. He is living in the UK as a political refugee under the 1958 Geneva Convention. He is currently taking the Graduate Diploma in Law (GDL) at Oxford Brookes University to become a Barrister in the UK. He hopes to continue his research to complete his thesis at Oxford University.

In this seminar Reverend Theodore Ngoy will break the silence by bringing to light the truth about the war in Congo.

He will set out the root cause of the recurrent massacres in Congo, from the artificial creation of the Congo and the Rwandan genocide in particular, until the present day. He will demonstrate that all the conflicts in Congo and the consequent killing, mutilation and violation of the Congolese people have been instigated in order to exploit and plunder the resources of the country.

Please let us know if you are able to attend.