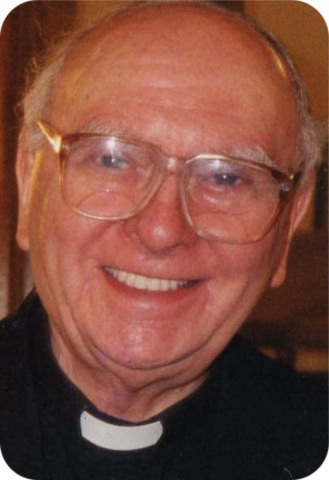 Fr Tony (John Anthony) Barry died unexpectedly on the afternoon of 11th August in James Cook Hospital, Middlesbrough, just months after his 90th birthday. He was born in Edwinstowe, Nottingham, but the family moved to St Joseph’s parish, Middlesbrough, and he was educated at the Marist College. After finishing school, he spent some time working in the Evening Gazette Office in Redcar before going to Ushaw College. He was ordained a priest in his home parish on 13th April 1947. He spent just over 20 years as a curate in a number of parishes – St Wilfrd, York, Bridlington, Driffield and Sacred Heart, Redcar, before being appointed in 1967 the first parish priest of St Clare’s, Middlesbrough.

He spent 27 years there, building up the new parish and establishing St Clare’s Primary School, a Mass Centre at Hemlington and St Gerard’s Primary School in Hemlington. Throughout his priestly life, he had a great commitment to Catholic education and to the involvement of the laity in the work of the Church, especially in the application of the teachings of the second Vatican Council. He was a very active member of the Charismatic movement, and held a long devotion to the Legion of Mary, an organisation in which his mother had contributed much service.

He retired from parish pastoral ministry in 1997, and spent the next 10 years as a priest in residence at St Andrew’s, Teesville, where he assisted successive parish priests. He returned to Middlesbrough in 1997, spending a short time at the Cathedral before moving into care.

His mortal remains were received into the Cathedral by the Dean, Fr Gerard Robinson, on the evening of 17th August, and during the brief service, Fr John Loughlin, parish priest of St Clare’s, preached a short homily.

The principal concelebrant at Fr Tony’s Funeral Mass the following day was Mgr Gerard Dasey, who was joined by 43 Diocesan priests and Rt Rev Anthony Maggs (Fr Tony’s cousin). Mgr Ricardo Morgan, who had been a curate with Tony at St Clare’s for a number of years and later cared for him at Teesville, preached the homily. Fr Tony was buried at Acklam Cemetery after Mass.