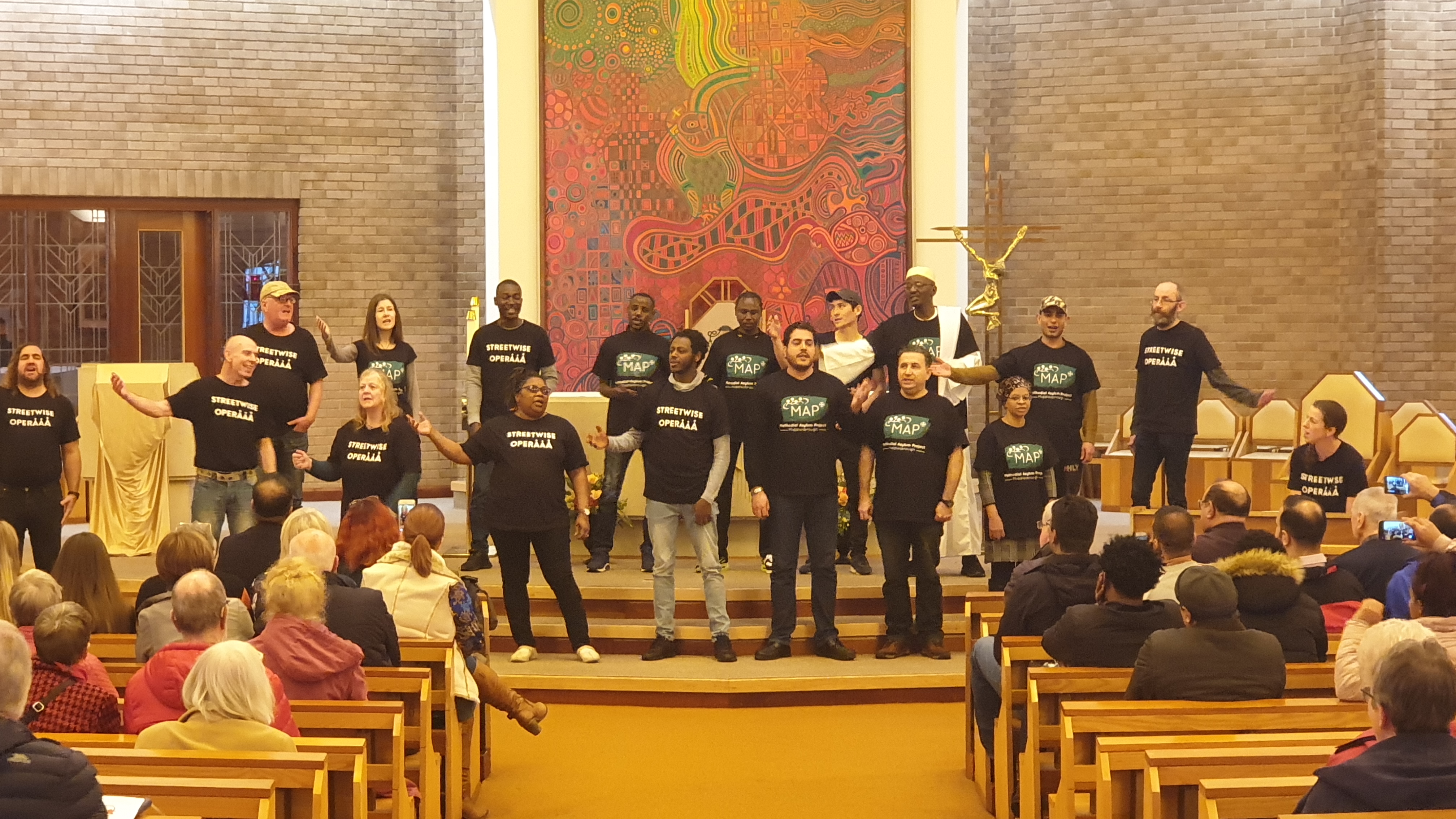 24
Jan, 2020
World Day of the Poor | St Mary's Cathedral, Middlesbrough
In Solidarity With The Poor – Who Will Speak If We Don’t?

More than 250 people gathered in our cathedral to follow Pope Francis’ call to stand in solidarity with those in poverty on the third World Day of the Poor.

This inspiring event, organised by the Diocese of Middlesbrough Caritas team, brought together many agencies whose aims are to combat poverty in its myriad forms, across the diocese, nationally and internationally.

After a welcome from Bishop Terry, Middlesbrough-born Sister Lynda Dearlove gave the keynote address, speaking of her work with women at risk of prostitution through the Women at the Well project.

The issue of poverty was highlighted by people’s stories, through drama and music led by Streetwise Opera.

People were asked to listen as those living in poverty on Teesside shared their experiences. One young mother spoke of her situation in dealing with Universal Credit which left her and her daughter in dire poverty and at risk of homelessness.

She also talked of how grateful she was to the CAUSE hamper campaign, which not only helped her at Christmas but at other times during the year too. Her story is one of hope and she is working hard for a better future for her daughter and herself.

We heard from Ali Awad Ali Muhammed, who came from Sudan to the UK as a refugee, seeking asylum. He spoke of how generously he was received on Teesside and how much they have helped him.

“I personally felt very affected by the day, which seems to have done so much good to so many people,” said Canon John Lumley, Episcopal Vicar for Christian Discipleship. “It was both moving and uplifting and the pace of the event seemed just right.

“I would like to thank everyone who did so much to bring the day together, especially the Caritas Middlesbrough group, who worked so tirelessly in the background for many months.”

Terry Doyle, who works with asylum seekers at the St John Paul Centre, said: “Bishop Terry asked me without a moment’s hesitation to be introduced to the asylum seekers and he genuinely and warmly shared a healthy conversation with some of them and of his time in Africa.

“I also saw Monsignor Ricardo and others deliberately sitting among the asylum seekers, most of whom were Muslim, and happily chatting away together.

“This is what Pope Francis asks of us – to be an inclusive Church where we get alongside our most vulnerable and marginalised people and listen to their stories. It is a sacred ministry indeed to do just what we witnessed at the cathedral.”

Methodist Asylum Project manager Ailsa told Terry it meant so much to her clients that people in the cathedral made them feel so welcome, even though many were wary because of their traumatic pasts and their fears of organisations and power structures.

“Everyone loved the day, from those who sang with us in Streetwise Opera and those who came along to listen,” said Terry.

“One of the Iranians was an architect back home and he spent his time marvelling at the design of the cathedral itself.

“Ali, from Sudan, was so proud to be able to wear his national outfit and speak to us all about how moved he has been to be so warmly welcomed into Middlesbrough.

“At such a fractious time in our political system, our warmth of welcome has to continue now beyond the event and our inspiration has to be Jesus’ messages of welcome as replicated through Pope Francis and all the many organisations who came together to express our Catholic faith and its social teaching.”

The event closed with a Liturgy of the Word led by Bishop Terry, who thanked our speakers and those who work so hard to help those in need.

Canon Lumley pointed out that the event isn’t an end in itself – reaching out to those in all kinds of need, both at home and overseas, has to be a daily commitment from all of us who claim to be Christians.

What some of you said about the day…

“The testimony of the woman supported by CAUSE was moving and showed the power of the human spirit. Thanks to all who organised the day. Sister Lynda’s reflection left me with much food for thought.”

“I can’t tell you how I felt when I saw the rainbow candle and an LGBT stand in the Cathedral. After all these years, I finally felt that I really belonged to my Catholic Church.”

“Wasn’t it great to have people of all colours and creeds in the cathedral and to have a Muslim guy speaking to us? I smiled inside when I listened to him.”

“A celebration of all the good work in our diocese to support the vulnerable, the marginalised and those in poverty. It was indeed an inspirational day, with uplifting music.”

“It was such a moving experience. I was full of admiration for the young woman, who I spoke to later, bless her, and she needs all our prayers. Sister Lynda was amazing, such wonderful work she does.”

“It was a very uplifting day. I particularly enjoyed talking to Ali who offered his services to talk at other events.”

“It was by far the best Church event I have ever been to.”

“I was moved to tears listening to the asylum seekers singing.”

“I got up and danced in the aisles to the singing, it moved me that much!”

“It was a very moving and inspiring experience. Wonderful to see so many people there representing some of the fantastic work that goes on to help those in need of love and compassion in our country. The testimonies of deep gratitude of those who have been helped were humbling.”