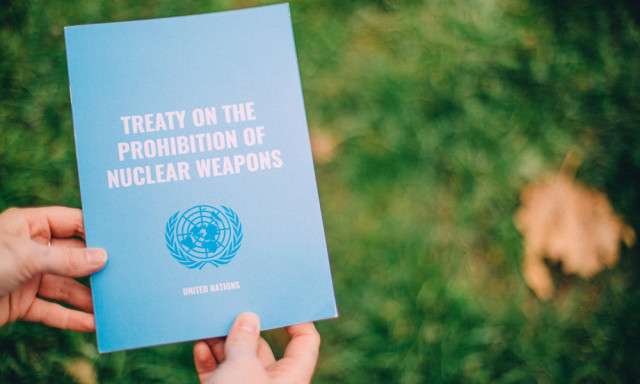 The Ursuline Sisters UK are asking supporters to sign back petition urging the government to rethink its current stance and sign the UN Treaty on the Prohibition of Nuclear Weapons.

This treaty was adopted on July 7 2017 and after being ratified by its 50th state party in came into force on January 22 2021. However, none of the nine nuclear weapon states have signed or ratified the treaty, including the UK.

“Pope Francis has signed the treaty on behalf of the Vatican State. The Catholic Bishops of England and Wales have petitioned parliament to sign. Most Christian and interfaith leaders in England have also given strong backing to the treaty.

“Ever since the city of Hiroshima was obliterated by a single bomb in 1945, our world conscience has been ill at ease. Hundreds of thousands of innocent civilians died and countless more had their lives blighted by the horror, by sickness and by loss. Those engaged in nuclear weapon manufacture, development and training are also exposed to long-term ill health including cancer and genetic damage.

“A modern-day nuclear war is unthinkable. Casualties from a major nuclear war between two of the nuclear powerhouse countries would reach hundreds of millions of people. The simple reality is that the international community could never hope to deal with the impact of nuclear weapon use.

“Less than one per cent of the world’s nuclear weapons could disrupt the global climate and threaten as many as two billion people with starvation in a nuclear famine.

“It is becoming less and less possible to justify the huge costs involved in maintaining and developing nuclear weapons. In March 2007, the UK parliament voted to renew the country’s Trident nuclear submarine system at a cost of £20bn.

“In March 2021, the government reaffirmed their commitment to upgrading and maintaining Trident as a continuous at-sea deterrent. Billions of pounds are being misspent annually, money that could be reinvested to alleviate the suffering of the poorest and most vulnerable of our society.

“We urge the government to rethink their stance on nuclear weapons and sign the Treaty on the Prohibition of Nuclear Weapons.”